What’s so wrong with living in debt anyway?

As someone who has quite a bit of experience with this – I can tell you that sometimes it feels like debt is just inevitable. You are always going to be behind anyway, so what’s the point of getting out of it?

It’s super easy, especially when there are times that no matter what you do to get ahead it feels like you are just always falling backwards, to just give up and give in.

I mean, why even bother? Why work your butt off when you know nothing is going to change? You will always need something that you can’t afford, or have unexpected expenses – it’s the way life works.

I know this because I see my husband doing it.

We run separate budgets – which may seem odd to some, but because we each have our own businesses, it’s easier this way. We each have our bills that we are responsible for, and should one of us need help, the other fills the gaps. (It’s usually him filling the gaps, because quite frankly, I’m not historically very good with this stuff).

Five years ago he left a job teaching to start his own construction business. At that point, my business was killing it, and we were doing great. I got my debt paid off, but I didn’t change my spending habits. He, on the other hand, was faithfully abiding by his budget, and putting money away for later.

And when I say he’s good at this stuff…I mean really good. He should teach classes.

Me, on the other hand, yeah, not so much.

He’s at the point now that if he wants something, he buys it. He doesn’t have to decide if he can afford it – he just buys it. (He’s very, very good with differentiating between something that is a good purchase, and something he might regret later.)

I admit, fully, that if I would just try a little harder…be a little smarter with my money…or maybe listen when he tells me what I’m doing wrong that I would be in the same place he is.

I’m not saying any of this to make it seem like we aren’t a team…or like he doesn’t step in and have my back when I don’t have the money for something – because he does. ALL. THE. TIME. And he’s been doing it since we were first together. He always takes care of me, even when I’m a less than responsible human being. If it weren’t for his money skills, we’d both be a mess, rather than it being just me.

What’s so wrong with living in debt?

It’s not a wise use of your money to pay interest to big banks and credit cards. If you look at how much you pay in interest over the lifetime of a credit card debt, you would cry. You, in many cases, spend double or even triple what an item costs just to have it quicker.

Because I make bad money choices, or don’t make enough money to pay my bills because I’m not using my time efficiently, I pay a price for it. Literally. Things cost more when you buy them on credit.

If I would just follow my budget, be more judicious about my purchases and stick money away for when times are leaner + work smarter (not harder), I would find myself in the same place my husband is. We would both have enough money to do whatever we want, whenever we want – instead of him always waiting on me to have the money – or floating me a loan until things get good again.

It’s a choice you have to make every single day. Just like working out, or eating right. You may stumble, but you don’t have to give in to the inevitable. You can get out of debt. And you can live a life where you actually just have the money to do things. It’s not just a pipe dream. 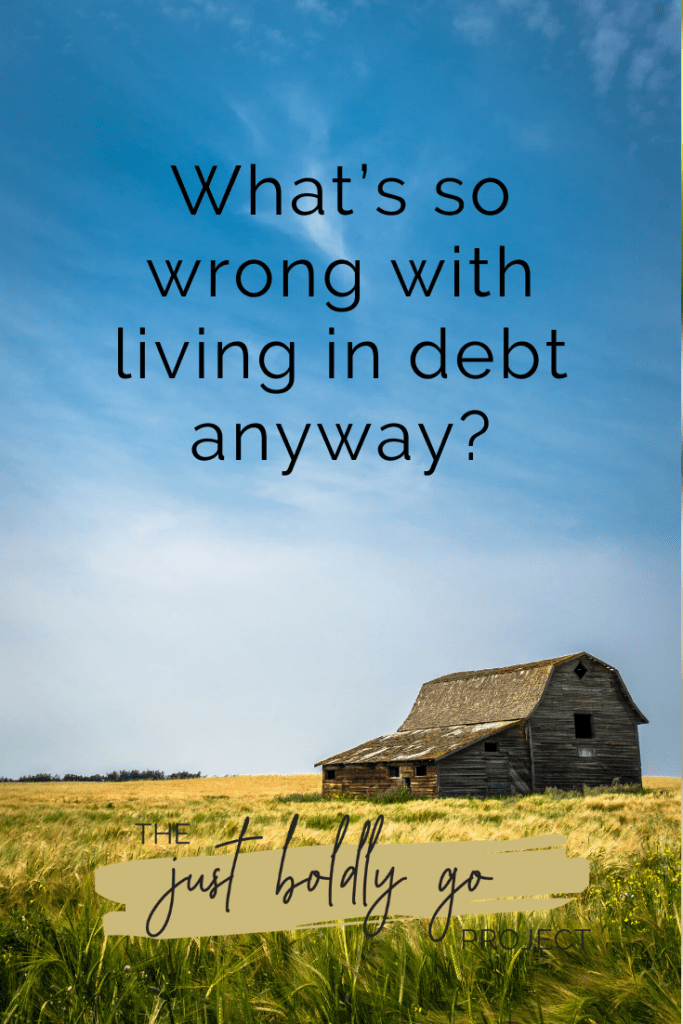