Semi-Heretical One-Sided Conversation on why Astrology Is Not from the Devil.

I grew up going to church every Sunday morning, Sunday evening and Wednesday night. Literally the only time I was allowed to miss was the time I had chicken pox for nearly three weeks.

I tell you this, so that when I tell you that I was raised in a church-y home, you understand exactly how church-y.

I am still a follower of Jesus, but my upbringing left me with certain ideas about things, and if you grew up in the Bible Belt, you probably have them too.

I want to dispel one of those ideas today.

What I’m going to say might be seen as heretical, but I promise, I have proof.

Astrology is not only NOT a thing that is of the devil – it was created by God, and it is a tool he left us to use to guide us.

Yep. I said what I said.

First, let’s start with Church vs Bible. They are not the same thing. Just because you heard a thing said at church by a minister does not make it Biblical.

I’ve heard countless sermons that advise against reading your horoscope. Actually, I don’t disagree with that. In general, unless you have a skilled astrologer who knows your birth chart well, avoid those dailies. The newspaper horoscopes are generally worthless.

The business of the “church” at large is to control, and to have a bunch of people who interpret scripture on their own has never been their ideal – that’s why protestantism is even a thing. They definitely don’t want you getting your advise from God from anyone but them.

I will concede that there are scriptures that say talking to dead people is a big no-no. But when it comes to Astrology, there is plenty of evidence that Godly men utilized the stars to know which way to go.:

The facts are these:

“And God said, “Let there be lights in the expanse of the heavens to separate the day from the night. And let them be for signs and for seasons, and for days and years.”

Both Joseph and Daniel were Astrologers, Diviners and Interpreters of Dreams.

“And in every matter of wisdom and understanding about which the king inquired of them, he found them [Daniel and his friends] ten times better than all the magicians and enchanters that were in all his kingdom.”

The heavens declare the glory of God;

the skies proclaim the work of his hands.

Day after day they pour forth speech;

night after night they reveal knowledge.

The magi (or wise men) looking for the recently born Messiah…

“Where is he who has been born king of the Jews? For we saw his star when it rose and have come to worship him.”

There is an Ancient Jewish system of Astrology (Kabbalah) that has been used for centuries and is still used today.

Astrology is not banned by the Catholic Church and many popes have been known to utilize it.

If you want more – check out this great article.

It isn’t the reading and receiving of the messages that is the problem. In fact, it’s much like the passage about money. It’s not the money that’s the problem – it’s the loving of it.

Likewise, it’s being obsessive about the messages or relying solely on them that is the problem.

The practice of Astrology is an ancient one. And I fully believe it was given to us so that we can understand ourselves better.

It holds clues to our uniqueness.

Even though there are thousands of Sagitarriuses (Sagitarri? people who were born Sagitarrius? ), I am still a unique creation.

My point in telling you all of this is that I want you to understand that there IS big magic in the universe, that God created all of it, and he abides by it too. It’s all one big, gorgeous symphony, choreographed by him, and we get to play our small part.

When we learn to work with what he gave us, we can perform at our best.

That’s why I’m a strong advocate for at very least knowing your sun, moon and rising signs.

The sun sign is who you are. The rising sign is how the world sees you. The moon sign is the secret bits of you that only those closest to you know about.

Understanding these are key to living your best life. They are also key components of my signature program, Business Breakthrough for the Rebel Curious. When you operate your business from a place of knowing yourself better, you will be amazed at how different things go.

If you don’t know what your sun, moon and rising signs are – you can get your free chart and more info on that here. 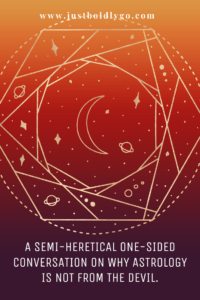