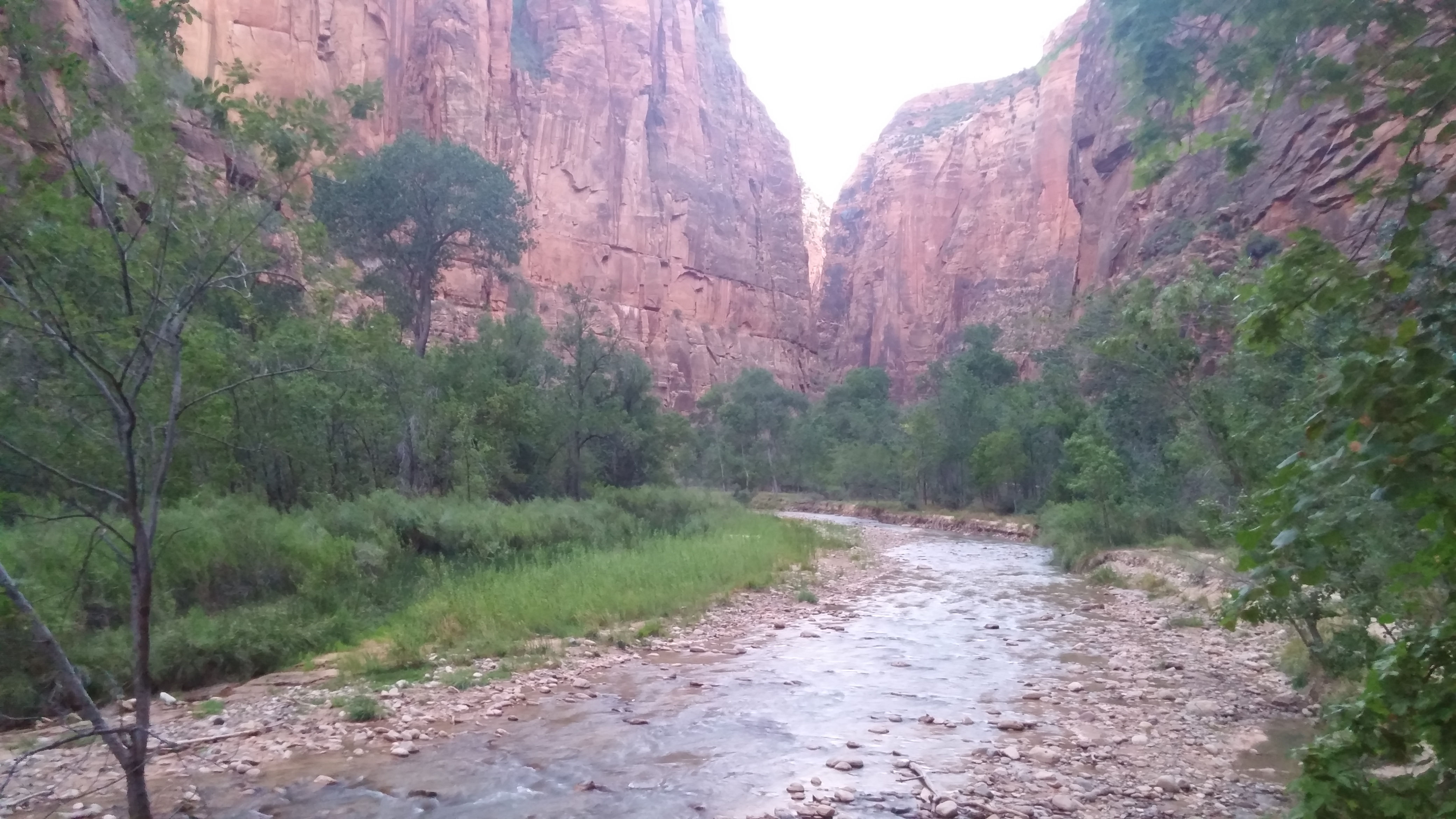 Every year for our anniversary, the husband and I try to do something special. Neither of us really needs anything, and I would rather go on a trip anyway. Two years ago he took me to Chicago to see the Pirates play the Cubs (I’m a giant Bucs fan). And last year we went to California for a four day excursion (I’d never seen the Pacific or, well, any of the state).

This year, he let me plan it – and every day this week I’m going to recap the same day that we were gone.

We flew out last Sunday from Cleveland to Vegas. It was 104 degrees when we landed, and 108 by midday – but I found out that what they say about dry heat is completely true. I didn’t mind it a bit. We stopped at Valley of Fire State Park and Little Jamaica in Arizona on our way to our first destination…Zion National Park.

Zion is gorgeous. It reminded me of a mini Yosemite, but with red rocks.

Our goal at Zion was to hike The Narrows.

In total, there are 10 miles of river that you are allowed to hike without a permit. You can even carry in gear and camp at designated spots along the route. We were not so ambitious. We had other places to go, and other hikes to hike.

Because Zion doesn’t let you drive all the way into the park, it’s best to get there early. We were lucky enough to find a parking spot on Sunday evening, and hopped on the tram that takes you around the park, just to get a look-see. It was lovely, and helped us plan for getting up crazy early the next day.

The first tram leaves the visitor center at 6am, so we were there by 5:45 to make sure we got a spot – both parking and seats on the tram. There are two cars, and they weren’t both full, but there were several other people up early too. We like to get up early so we are the only people out there – so we were a teensy bit disappointed that it looked to be more than just us – but when all of them but one gal jumped off at Angel’s Landing we were psyched. And she booked it out to where she wanted to take pictures and turned back before we did. It was just us for at least an hour and a half.

The hike starts at the Temple of Sinawava – the last stop before the tram heads back to the front of the park. From there, it’s a mile back to the place where the trail leads into the river.

For us, the water was never more than just above my knees (I’m 5’4″) and though it was slow going, it was gorgeous. Just amazingly gorgeous.

The twists and turns keep you from seeing too far ahead, and make each bend an unexpected delight. You never know what you are going to find.

When we set out, we had no real goal in mind. We just planned on going as far as we wanted to go, keeping in mind that we had to hike all the way back, and that we needed to get to Bryce Canyon by the evening.

Unintentionally, we made it to the place most hikers plan to get to – the split at Orderville Canyon. It’s about 2.5 miles from the drop-off point to the split. This is just past the portion known as “Wall Street”

The hike is not all in the water – at least not when we were there. We had long stretches of dry sand/mud/rocks to trek around deep areas, but honestly, the parts in the water were my favorite. The water was cold and clear.

When we turned back, it wasn’t long before we met more hikers. At first just a few that must have been on the second tram. Then droves. We were SO happy we got up early, because not only were there people everywhere, but the more people that trudged through, the harder it was to see the bottom, and where to step.

We were spent by the time we were done – 5 miles of hiking isn’t a big deal, but when a good portion of it is through water with uneven footing, it feels like a whole lot more.

I cannot tell you how gorgeous it is – nor can I explain how lovely it really is. It’s definitely a hike worth taking, and one I would highly recommend.