Fun in the Fort: Revitalization at its finest 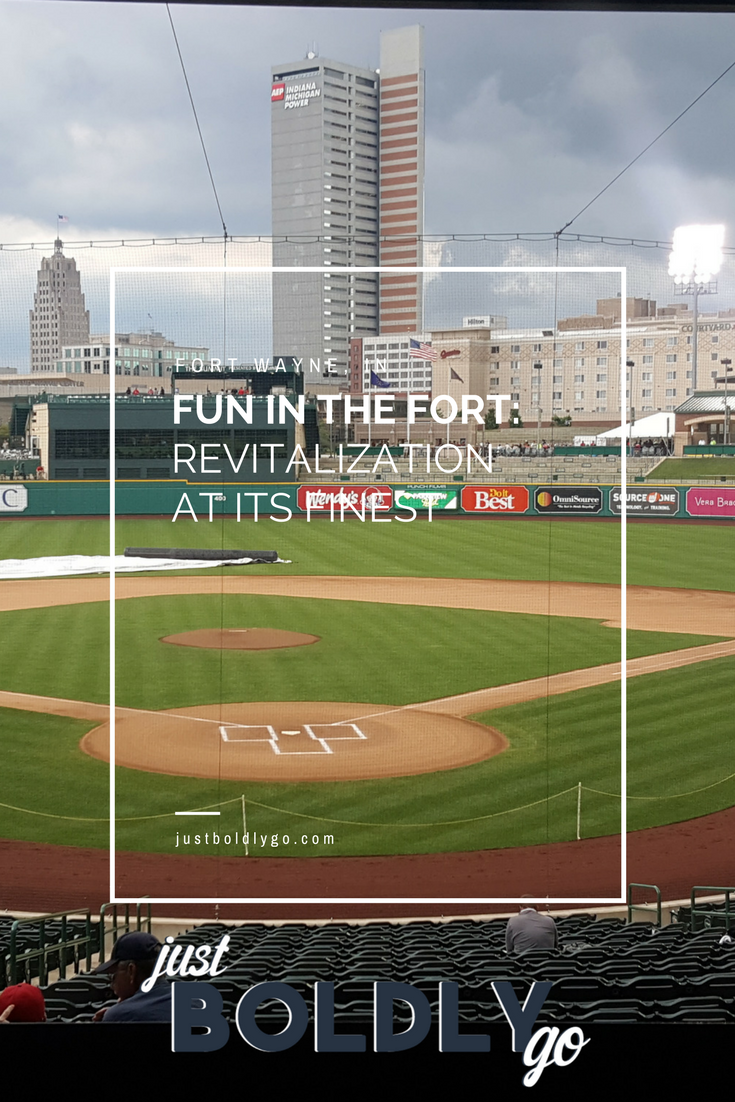 I have lived just across the Indiana/Ohio border from the Fort Wayne area for seventeen years. Early on, there weren’t a whole lot of reasons to make the 25 min trip. Maybe to go to the mall. Or for an event at the Coliseum… Every once in awhile, a Wizards game.

It all started when the Wizards changed their name and moved downtown. Parkview Field was constructed, and the newly named TinCaps brought with them the change the city was needing.

Or at least that’s the way it seemed to an observer from Ohio.

I realize now that there was a lot more going on – a driving force of forward-thinking folks who realized that to revitalize the old Fort, you had to create reasons for people to go downtown.

It wasn’t just the TinCaps. It was the renovations to the main library, the FW Museum of Art and the Grand Wayne Center. The cool new mall at Jefferson Pointe. The Wells Corridor restaurants (+ it’s just a plain cool neighborhood). And so many other things.

And now, they’ve taken it even further – making Fort Wayne a genuinely cool place to live.

Last week, I got a great opportunity to experience not only some of the coolest things that the city has to offer, but also got to hear first hand about the new riverfront project.

Thanks to the amazing people at Visit Fort Wayne, I and several other travel writers (+ our families) got the chance to spend the day in and really get to know Fort Wayne.

The day began at the Fort Wayne Children’s Zoo.

I have been before, but after visiting the National Zoo last year, I have to say, revisiting this quaint little zoo was a welcome change. The enclosures are very natural, giving plenty of space to move about, plus making great pains to keep the animals feeling like they are in their natural habitats. The African area is particularly nice. A large group of giraffes (with a new addition just born last night!) wanders about, and kids have a chance to purchase leaves of lettuce to feed them. Docents are everywhere, ready and willing to offer up info to anyone in the vicinity. Overall, it’s an amazing zoo.

As it turns out… Thursdays are for Lunch on the Plaza!

This is a new-ish thing that I had no idea about. Should you be in Fort Wayne, and mosey on down to Freimann Square around 11:30, you will be rewarded with the most delightful array of food trucks you’ve ever come across. We went for Tacos at Tacos Bravas, Pulled Pork at Ziffles Rib Bar and Banh Mi from Vietnummy. (With six of us, we can’t agree on anything…but that makes for plenty of tasting opportunities.) We were not disappointed. You can also expect to find vendors, fun and live music!

The afternoon was free time to explore what else the lovely Summit City had to offer.

First up for us was the Museum of Art.

We’d seen that they had a great glass exhibit, and were not only lucky enough to see it, but happened to piggy back on a tour the president of the museum was giving about it. It was gorgeous. The museum is exceptional.

Our next stop was, for lack of a better word – decadent.

Whichever human came up with the idea for this deserves every award known to mankind. The Yummi Bunni is a unique ice cream shop where you can not only get delicious, unique ice cream (from a place in Wisconsin), but they will take the ice cream of your choice and sandwich it between two heavenly halves of locally legendary Tom’s Donuts. PLUS they add at least one topping of your choice. I went with the special of the week – the Ooey Gooey: S’mores ice cream + bun + peanut butter drizzle. O.M.G.

DeBrand’s Fine Chocolates is one of those places that everyone knows about…but I’d honestly never been to. The chocolate is rich and delicious. I mean, this is the kind of stuff that you let your kids have one, and then you hide the rest so you don’t have to share…

Now that we were all sugared up, we headed over to Science Central to burn off some steam.

The old industrial building made over to teach kids about Science is a great hands-on, learn-all-about-all-aspects-of-everything place. The highlight for my 11 year old was the two story slide. For me, it was the suspended globe in the permanent Science on a Sphere exhibit.

We still had time before our scheduled Canal Boat down the river, so we also got to stop at the Botanical Conservatory.

Having never been in this architecturally significant site in the middle of the city, I was very impressed with not only the plants, but they manner in which they display them. The rain forest contains plants of Jurassic proportions – making you feel quite like an insect walking through the amazon. The desert’s arid beauty was equally impressive, with the largest cacti I’ve ever seen.

With only two more scheduled events to go, we were tuckered. It had been a long, great day already – and the rest of the day was equally interesting and amazing.

We met as a group at the West Dock of Headwaters Park (which is itself, an impressive spot for concerts, festivals and whatnot), and got a chance to ride on an authentically designed 1880s canal boat while simultaneously hearing about the improvements planned for the riverfront.

Which really makes so much sense. The city exists because it’s located at the confluence of three rivers.

The plans are impressive. And that’s an understatement.

The project is divided into two portions, the North Bank, and the South Bank.

The North is primarily green-space and will have the area’s first and only elevated boardwalk, a seriously humongous kid’s play area, and boat docks and ramps. It will be a central point for tons of outdoor activities.

The South is more about the city. From the brochure, “The south bank of the riverfront is designed around social interaction, special occasions and everyday outings. Its urban waterfront features include a variety of indoor and outdoor meeting spaces that range from small and intimate to large and spacious.” There will be plenty of green-space here too, but it’s more about interacting with the city.

And events. Oh, my, the events. Dragon Boat races. Film Series. Storytimes. Concerts. Duck Boats. Yoga. All manner of outdoor activitiesYou name it, they’ve thought of it, and implemented plans to do it.

I’m crazy excited for the event to open the whole project to the public – they have several things planned including (eek!) a floating marketplace.

And finally, the last event of the day…back to where I started this whole thing…a TinCaps game at the lovely Parkview Field.

Since the TinCaps moved downtown, it has drastically increased our family’s visits to the city. At least a few times a year, we head over to enjoy a game. The ballpark is amazing. The food choices are vast. The ballpark crew always makes it a great family-friendly event. And we’ve never once encountered anyone belligerent or rude (I’m looking at you St. Louis).

Even if I hadn’t gotten this amazing opportunity to experience Fort Wayne at it’s finest, I would still be a big fan of the changes the city has made over the last decade. Our family went from a few-times a year visit to regular, at least monthly trips for food and fun.

The change I’ve personally seen in this city is remarkable. I cannot wait to see what they’ve got planned next.