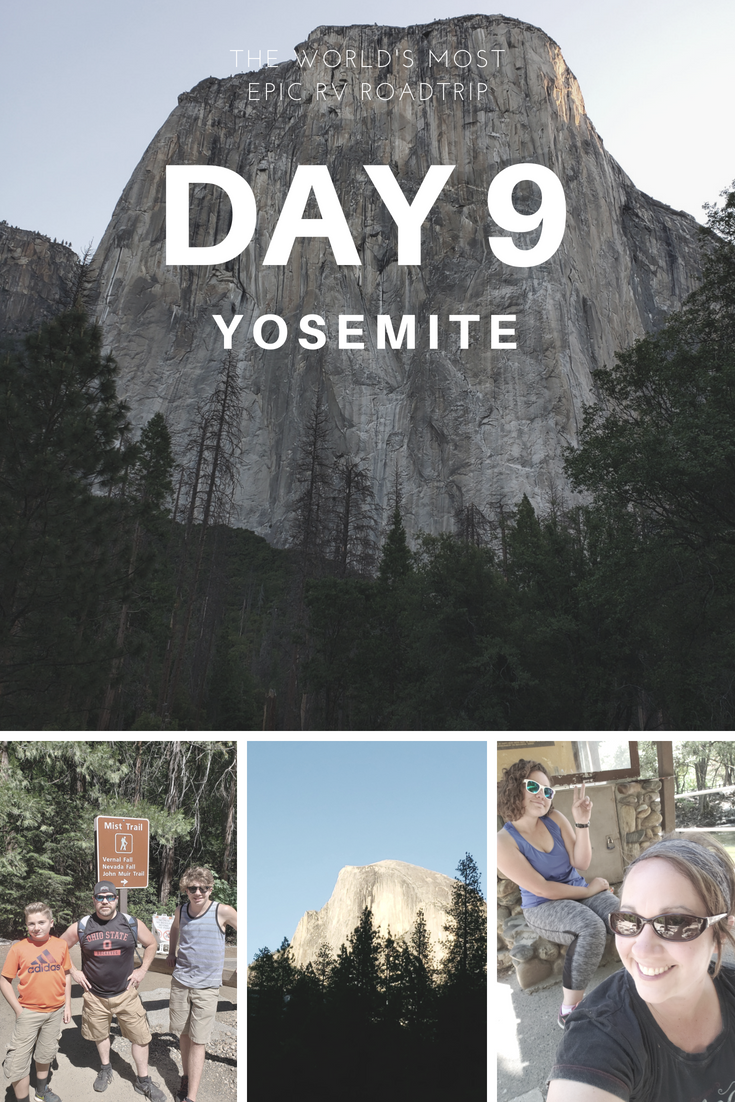 When you leave Lake Tahoe to the South, you will encounter an agricultural inspection point. They grill you about what kind of fruit you are bringing in and where you got it from. We blew the fellow’s mind because we’d been in California, only very briefly back in Nevada, and then in California again.

He asked where we were headed, we said Yosemite, and he asked if we were going in the front way or the back…and we were actually prepared for that one. We really wanted the kids to see it first from Tunnelview.

We set out from there, over the mountains and happened upon the most still pond I’ve ever seen. 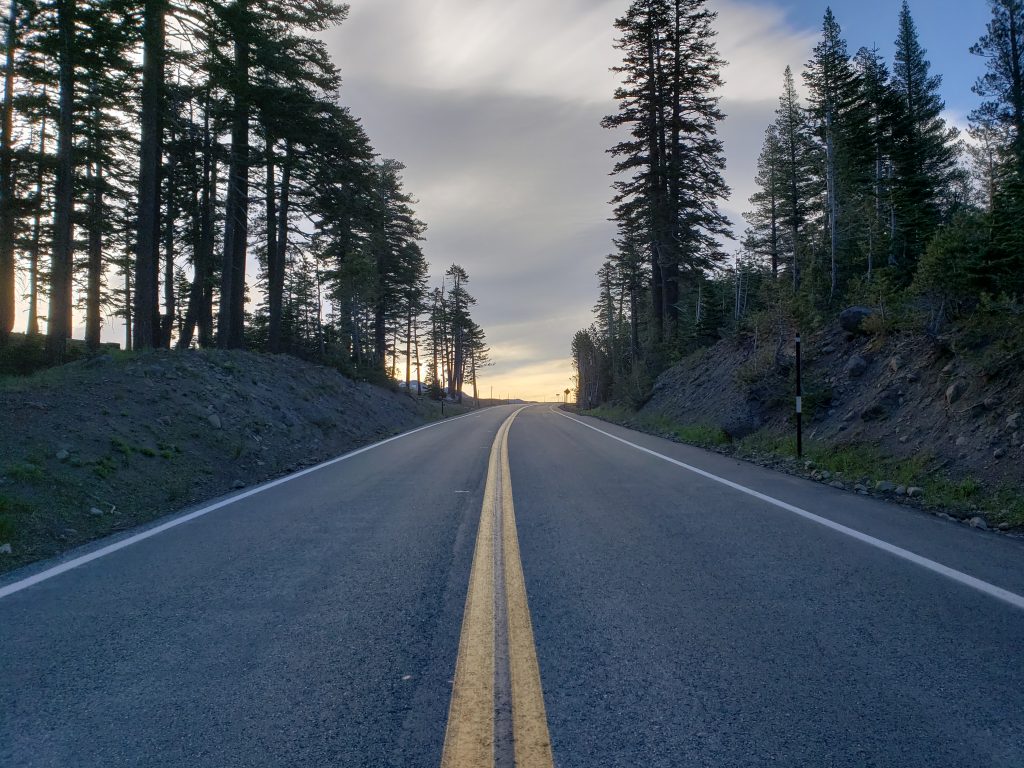 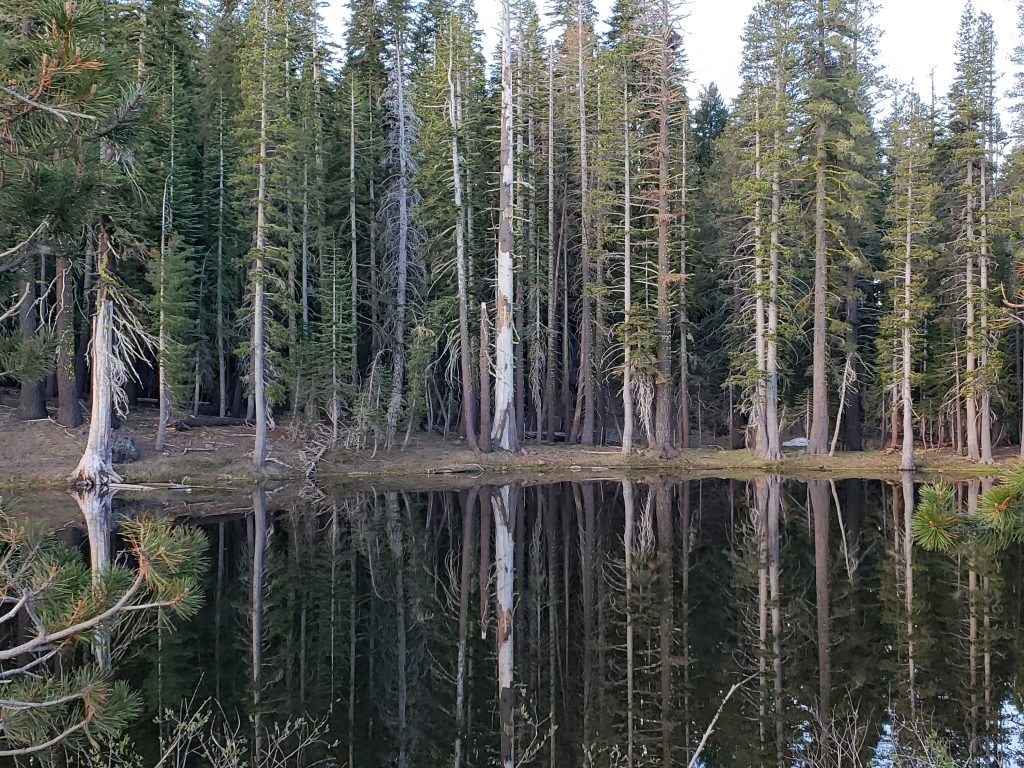 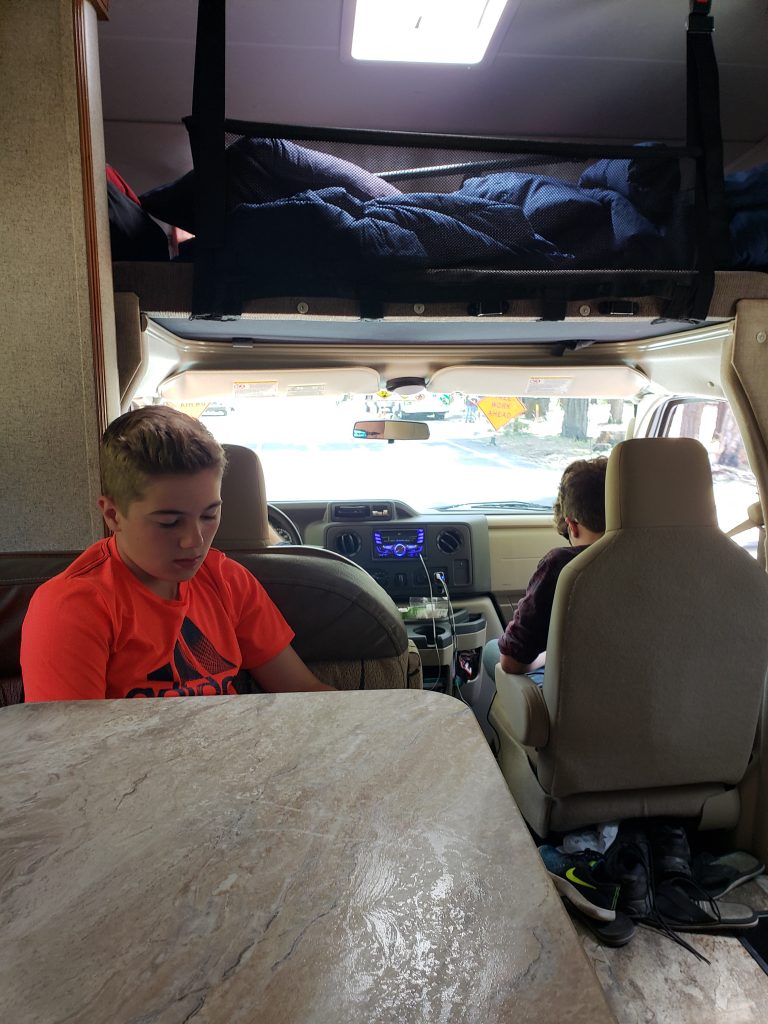 It was an extra forty minute drive to go that way, but it is SO worth it. Going from the golden, grass covered hills, past the charred trees and through that tunnel, it’s positively breathtaking to first catch a glimpse of the glacier-carved valley.

Except when we got there, we still went in a way that bypassed the tunnel. Ugh!

As mentioned before, Yosemite was one of our set-in-stone stops, and we had 2 nights planned here. Actually only the first night was booked, and we were really hoping to find a spot for the second night via walkup at one of the campgrounds.

The first night was at Housekeeping Camp. I’ll explain what that is…

Really, it’s just a bunch of cinder block buildings split into multiple camping areas. They are roofed, they have canvas dividers, actual beds with mattresses, a picnic table and a bear-secure place to store food. And that’s it.

There are showers (included with the cost of the reservation), laundry facilities and several bathrooms throughout the area. Oh and a beach!

We booked it, unsure if we’d even be able to use it, because we wanted to make sure we had a spot. It was MUCH more expensive than the regular campsites – but you do what you gotta do, right?

We were able to pull up next to our designated shelter, and even had enough room to put the slide out.

Once we got parked, we hopped on the shuttle and headed off to the do the hike to Vernal Falls. This is also the first 3 miles of the Half-Dome trail.

I almost always fall behind on a hike like this – it was steep. 12% grade over 3 miles is way steeper than this 41 year-old out-of-shape mom could handle, and I wimped out about 3/4 of a mile in. Grace made it farther than me, but ended up coming back too.

The boys made it to the top and got a ton of impressive shots. 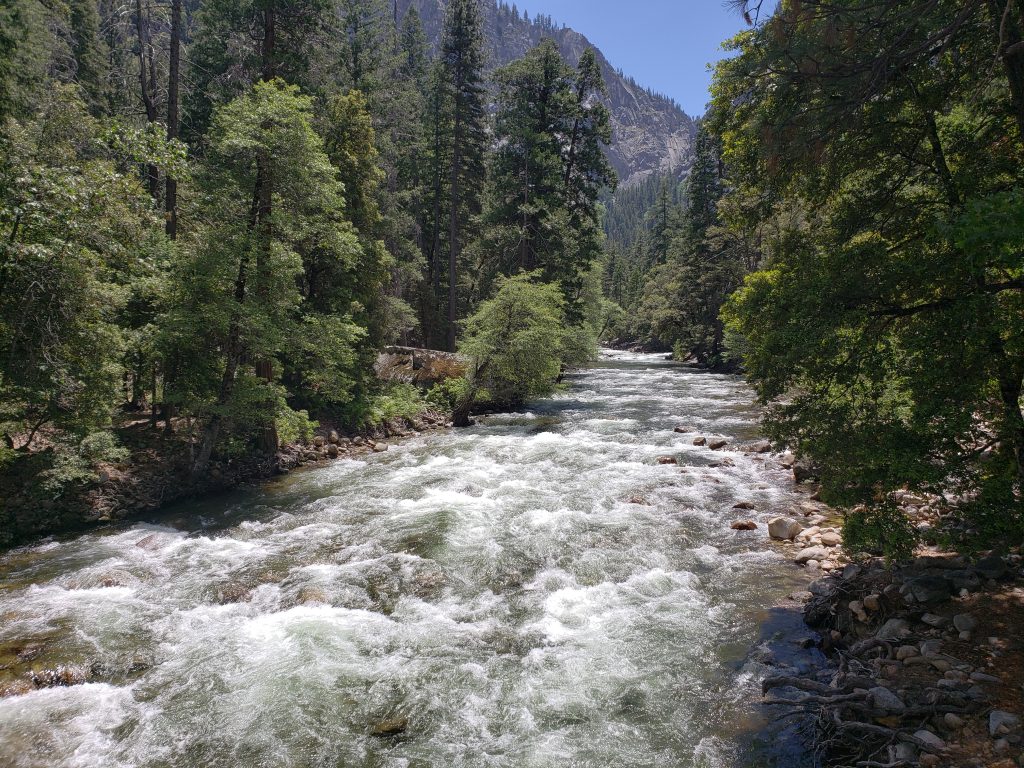 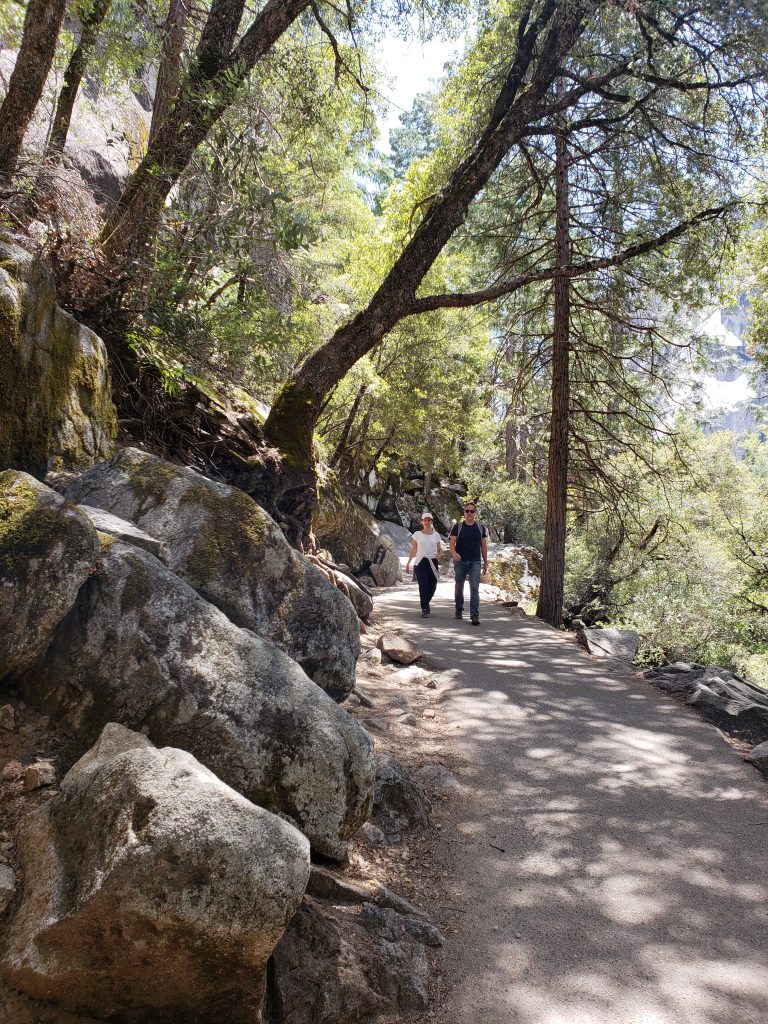 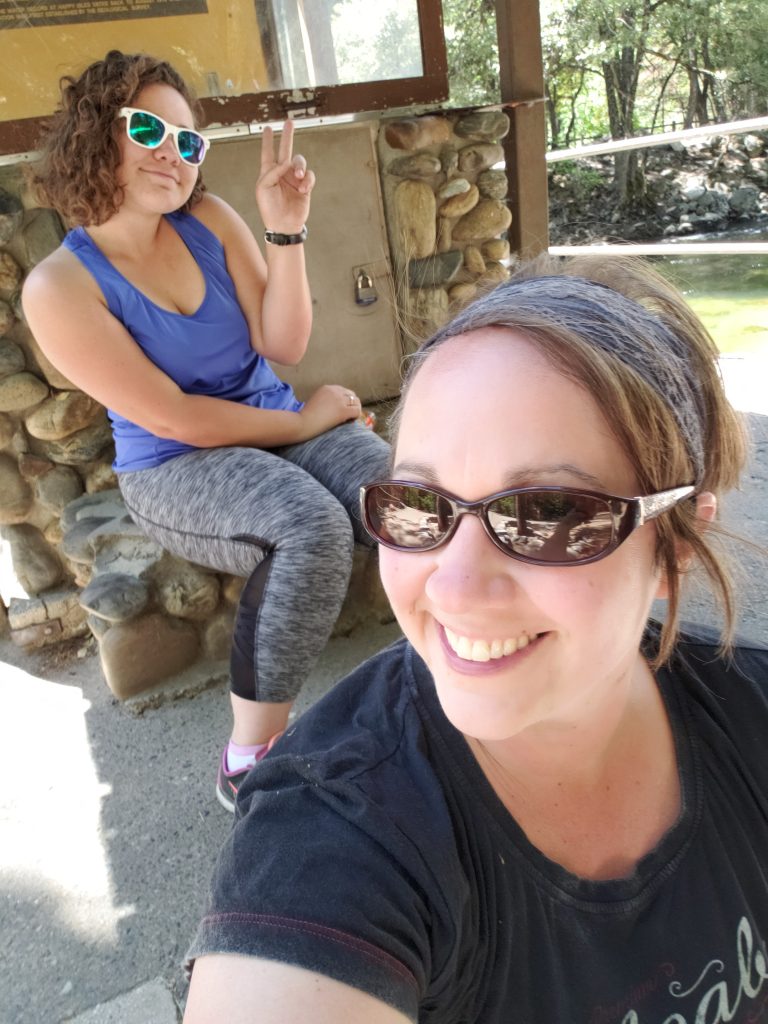 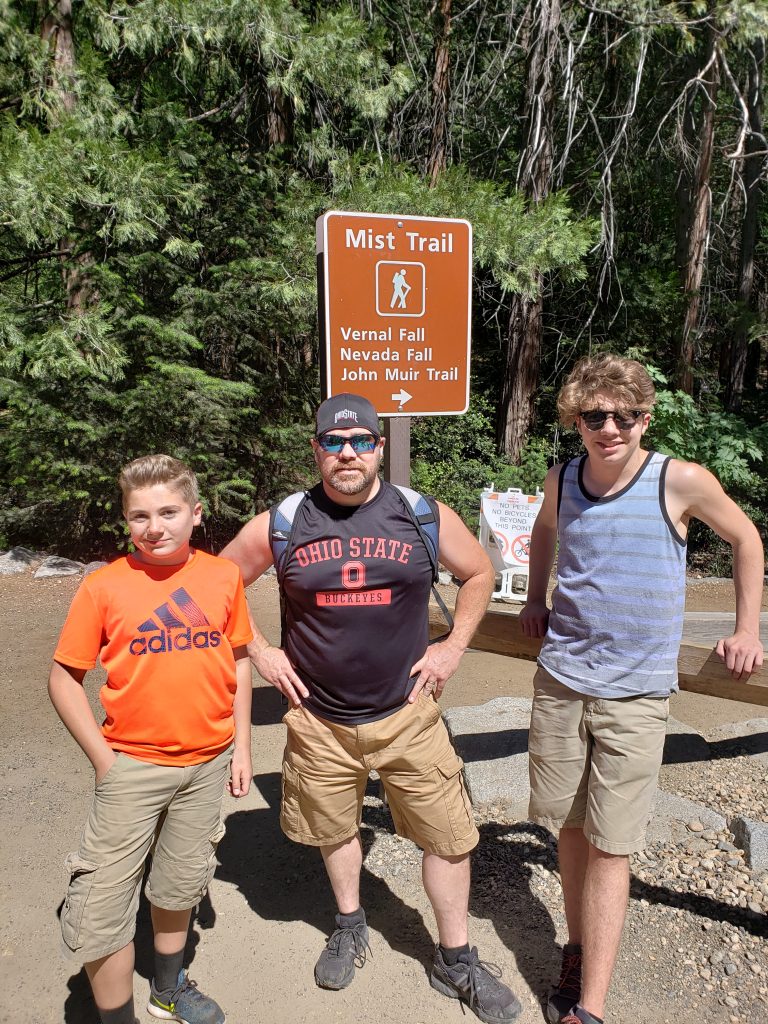 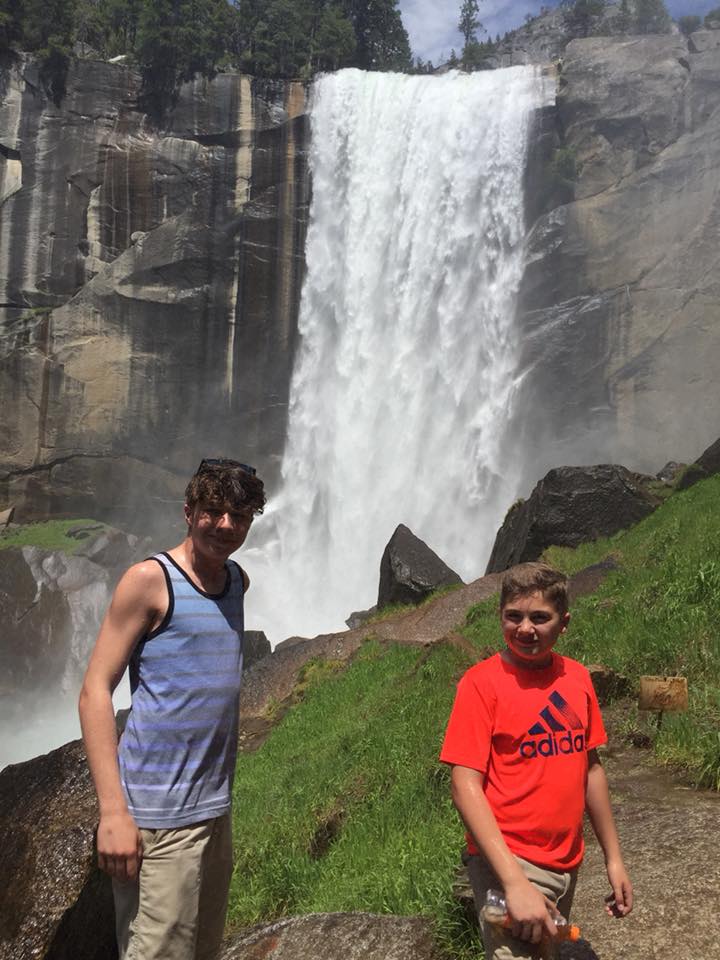 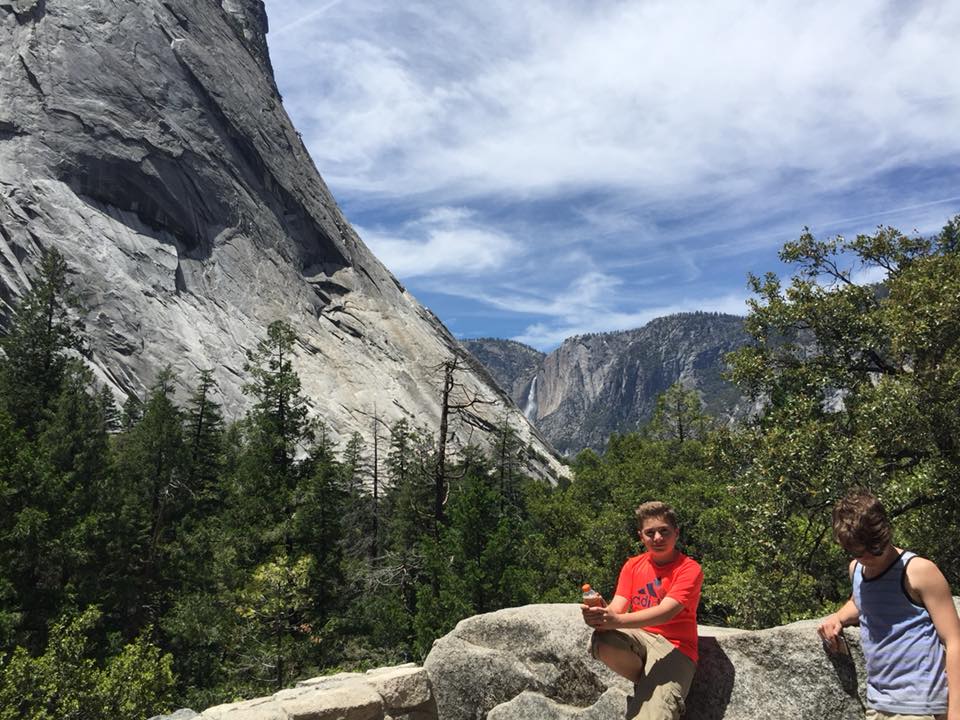 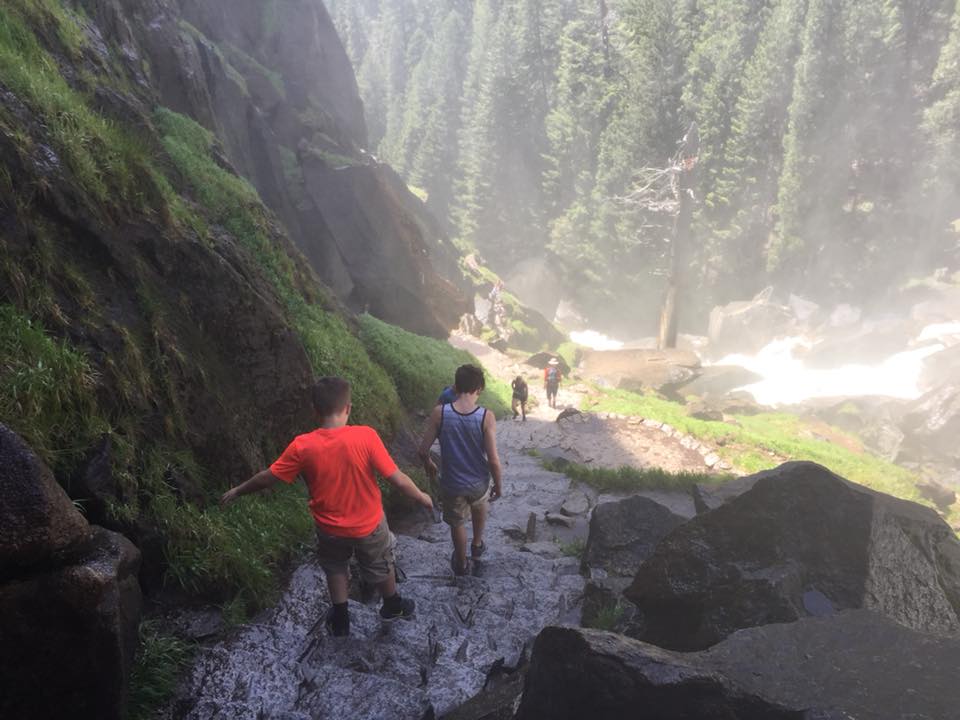 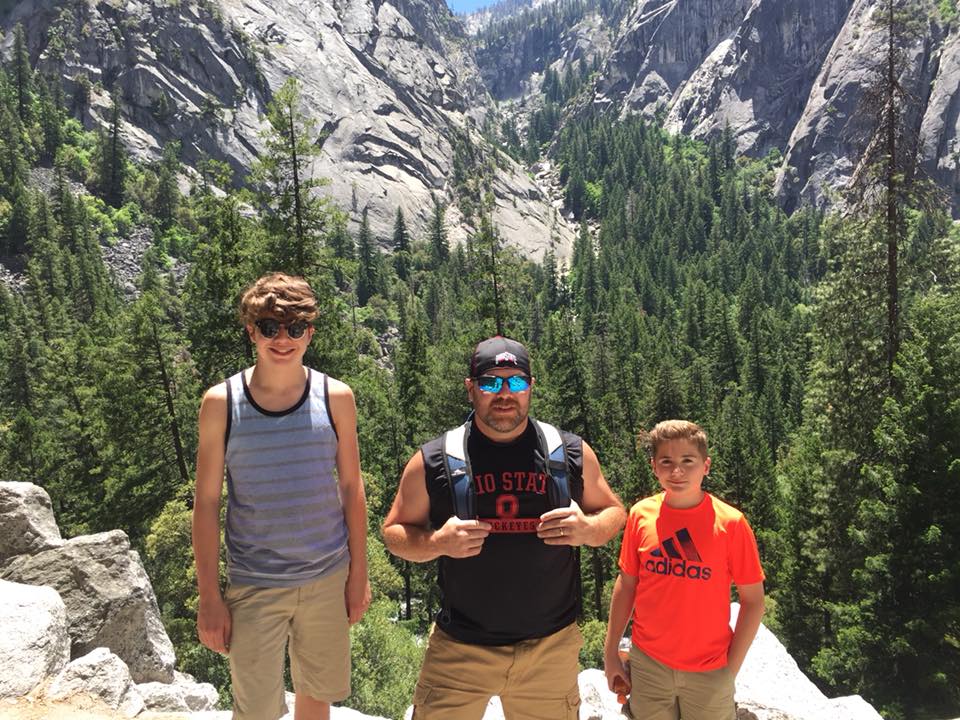 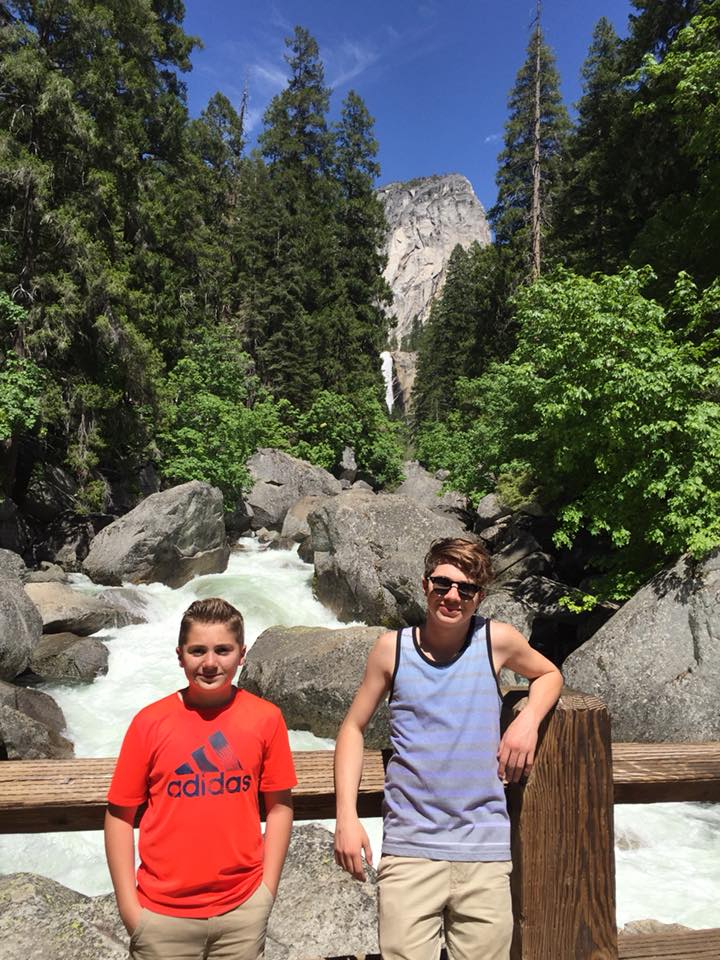 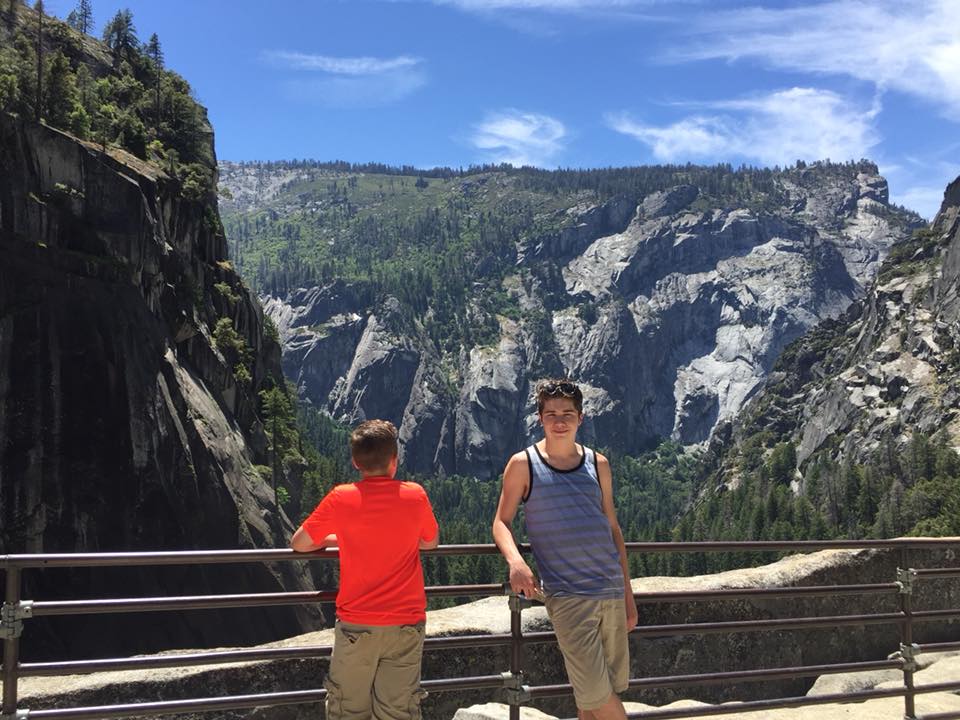 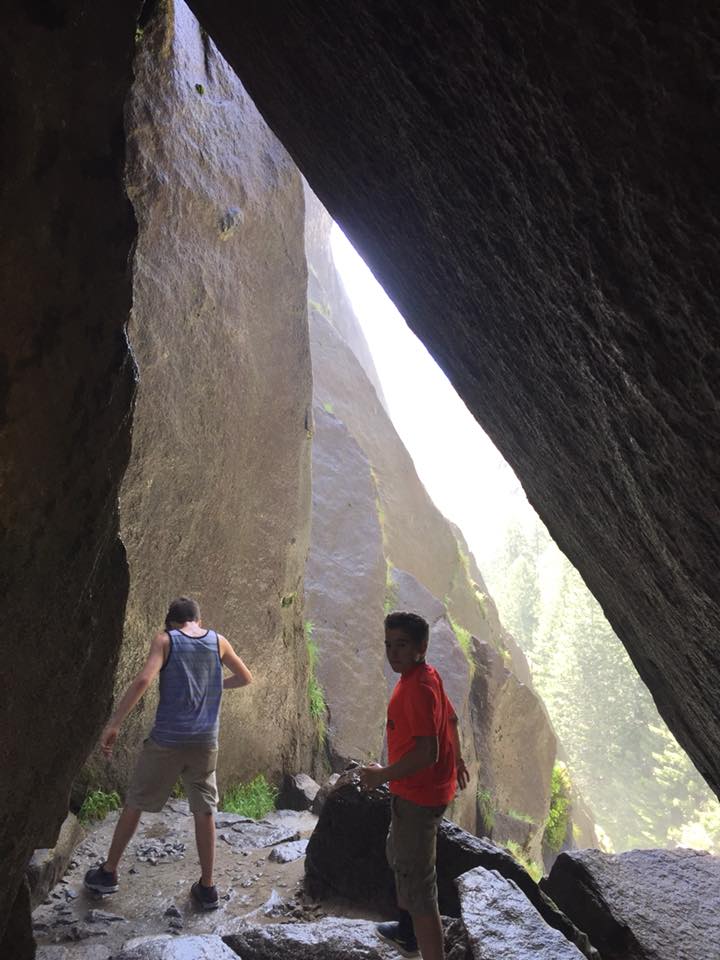 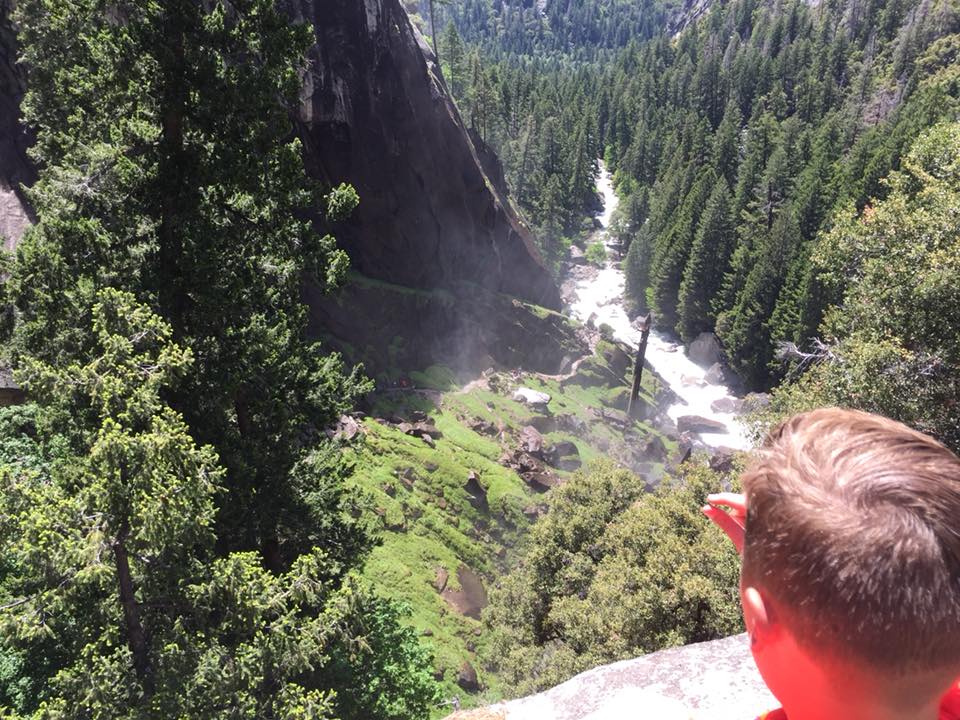 The park was PACKED OUT, so it took forever and a day to get the tram all the way back around to Housekeeping Camp. But we were needing food and to cool off, so we wanted to get to the beach. As it turned out, the water was QUITE cold. Snowmelt, and whatnot. We stayed for a while, but eventually headed back to shower up and settle in for the night.

We also made a pretty important decision.  We prefer to not be in uber-crowded parks, we’d seen what we wanted to see – and the Glacier Point was on the way out anyway, so we decided to ditch the second day in Yosemite and make more time for something else at a later time. By doing Glacier Point first thing in the morning, we’d beat the crowds too.

Yosemite is still one of my top ten parks – but I’d prefer to visit at a less peak time.