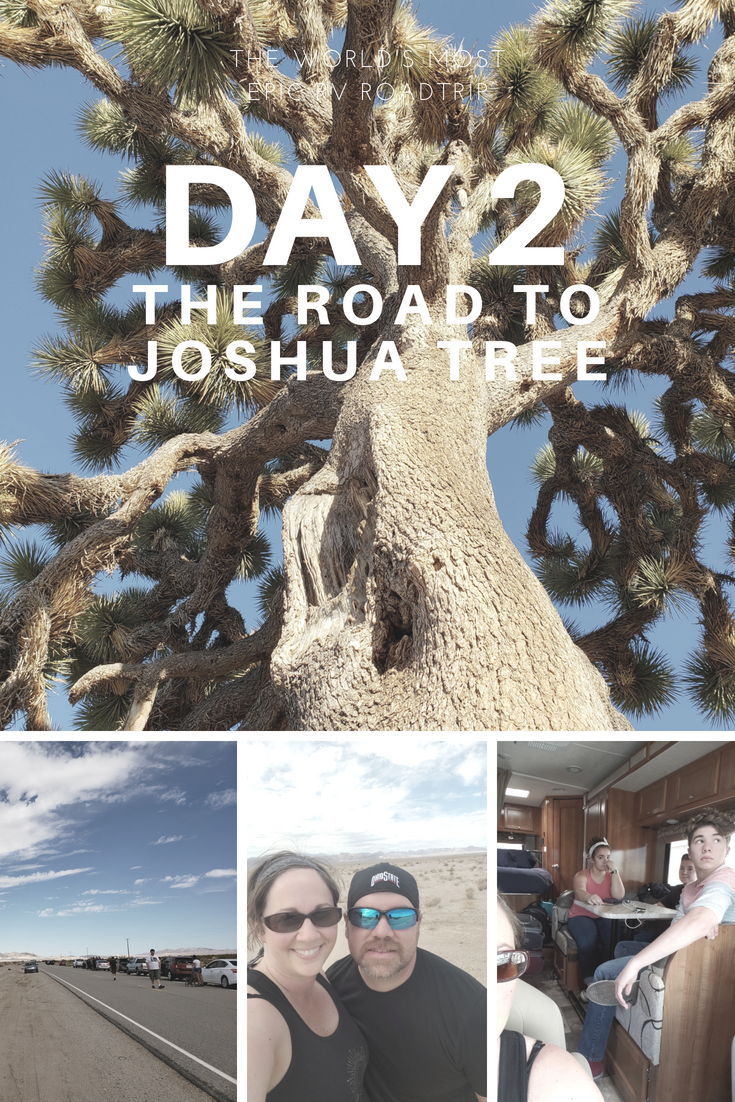 I’m going to let you in on a little secret. I hate to fly.

I do it, because it’s the only way to get where I want to go in an expedient manner.

But the truth is, I hate being trapped on that metal tube, with no fresh air, too many people crammed in around me, sardine-style, and really, the inability to use the bathroom without judgement whenever I feel like using it.

The good news is, we had clear skies the whole way, and got to see several cool things along the way: 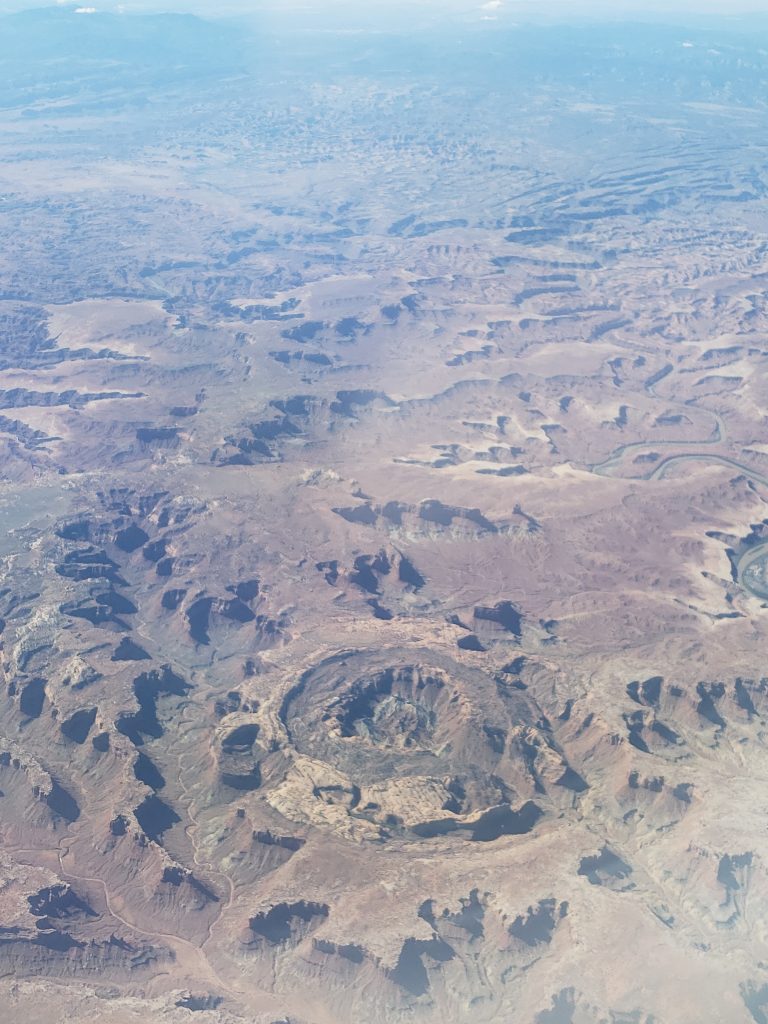 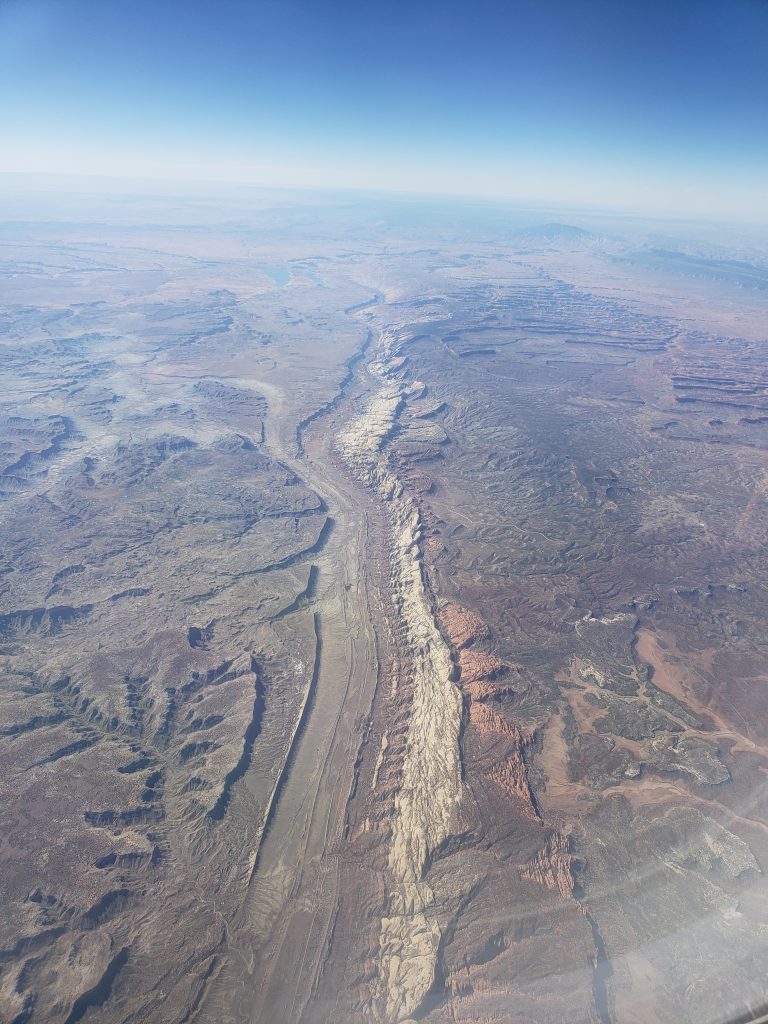 Anyway – we got there. To Las Vegas, I mean. We hopped in an Uber over to RoadBear RV’s Vegas Location. We’d made an appointment to pick up at 11 – but we were there by 10. They were totally ready for us – even had the camper started and the A/C on. 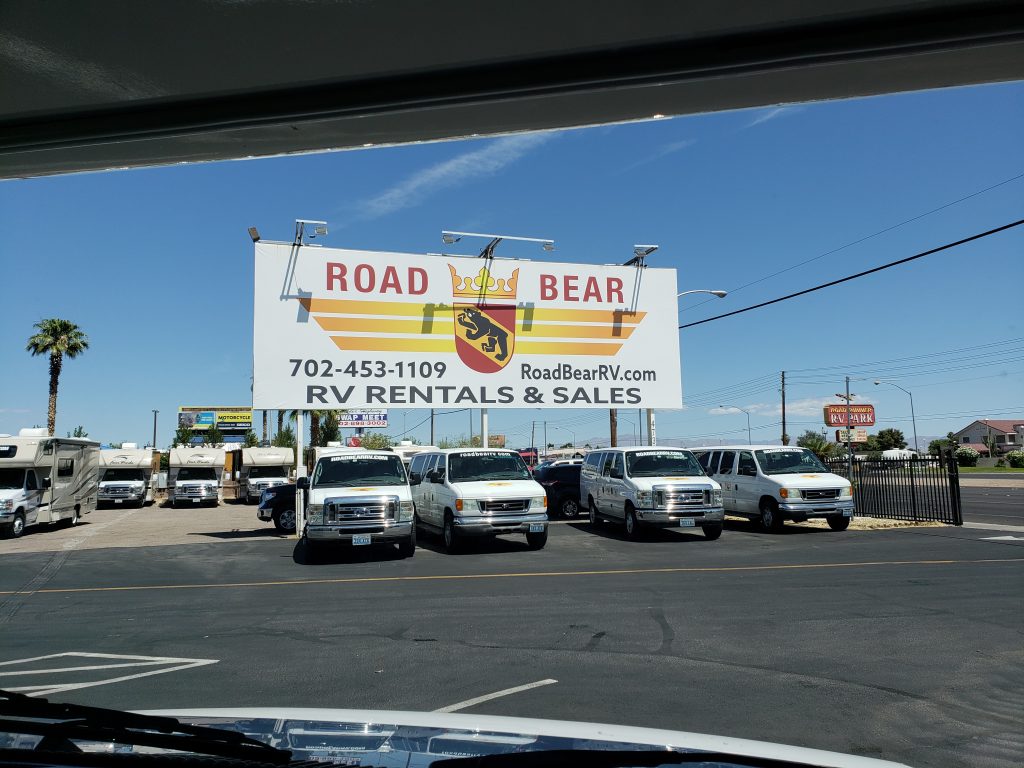 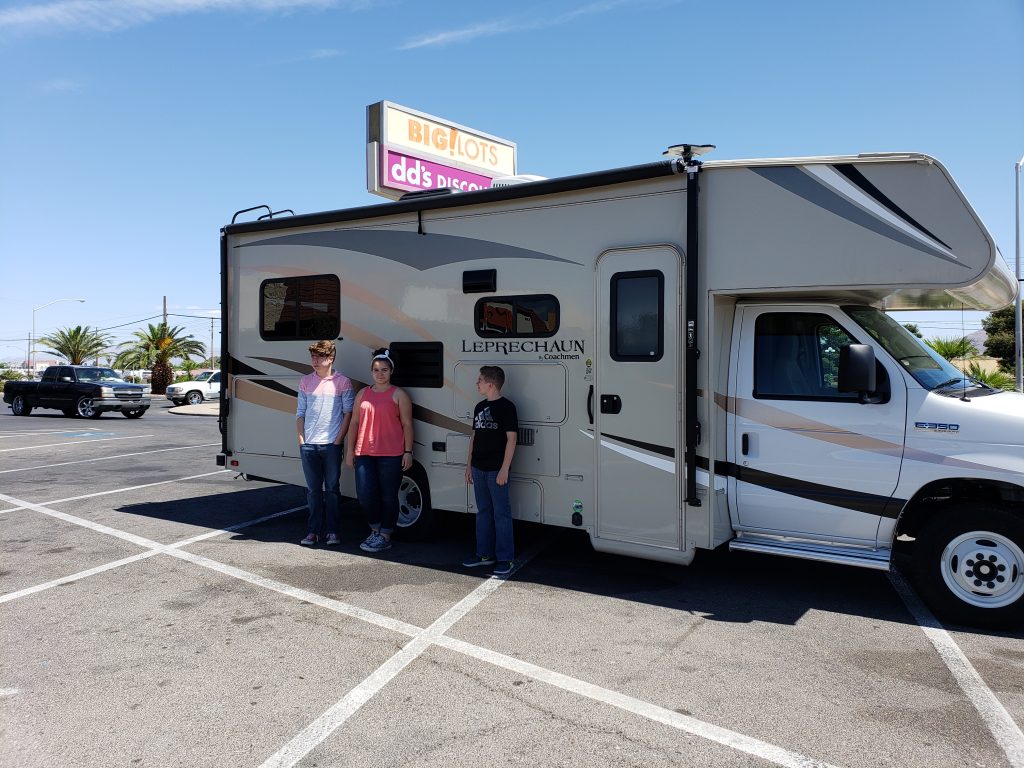 The process was super easy and painless – in less than 30 minutes we were on our way.

(Oh – bonus. RoadBear has the great room with shelves where previous travelers can donate stuff and you can take whatever it sitting there for free.)

We stopped quick to load up groceries and headed straight out of town.

I first spotted a Joshua Tree just outside of Las Vegas on a trip around Utah a couple of years ago. I’ve been enamored ever since. But, honestly, I am a BIG fan of trees – so this shouldn’t be a surprise to anyone.

When you leave Las Vegas and head toward the coast, the first logical stop is none other than Joshua Tree National Park. It’s roughly a 4 hour drive to get there, straight through the Mojave Desert.

You will see Joshua Trees on the way, as I did on that previous trip, but I promise, they do not even come close to the trees you will see in the park itself.

I should mention that our drive there was not uneventful. At the first sign of the aforementioned trees, my youngest son decided he MUST have a picture with a big one. At this point, I learned a very valuable lesson – do not step backwards in a scrubby, cactus-y environment to take pictures of your son. You will step on a cactus, which will result in your foot being sore and your toes being numb for three days.

Just after Amboy, California we encountered the Amboy Crater – which I didn’t know existed. It’s a sweet cinder cone volcano sitting in the middle of literally nowhere. 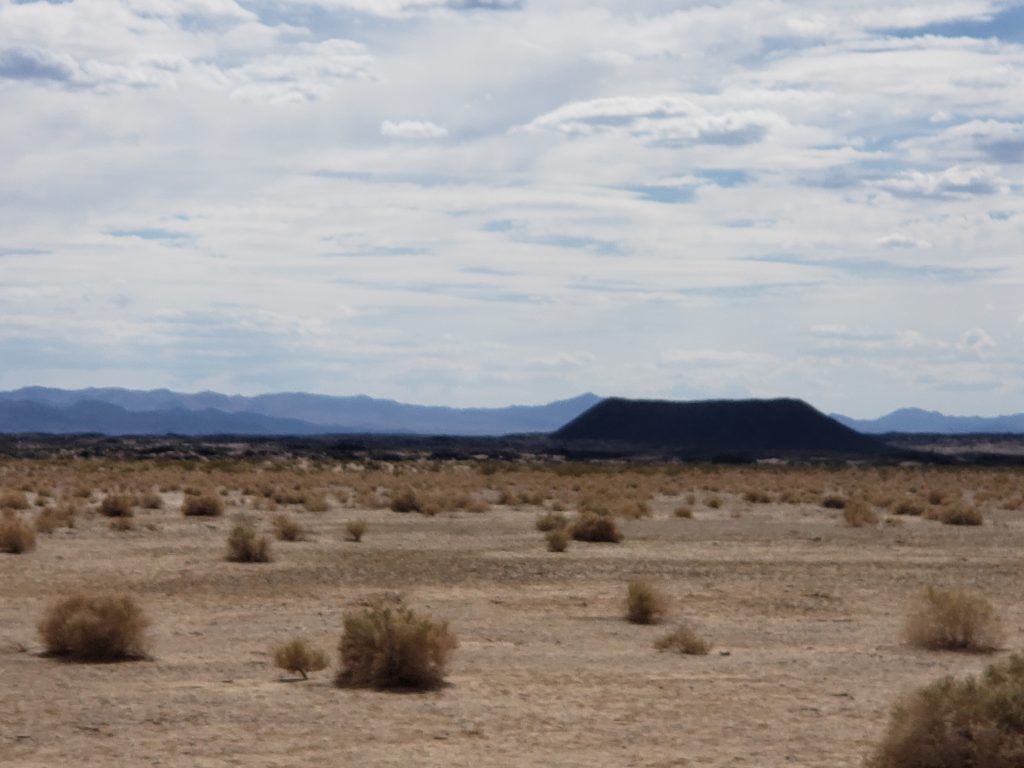 If you were wondering about where to camp in Joshua Tree, I cannot over stress that it needs to be Jumbo Rocks Campground. There are other perfectly nice campgrounds, but if you want the primo Joshua Tree experience, it must be Jumbo Rocks.

As for hotels – I didn’t see any. I wasn’t looking either, but usually I notice such things.

We were in site #28, which affords great access for climbing up, up, up for better sunset/moonrise views – and let me tell you, they are spectacular.

The campground was packed – but sites are positioned so that you barely notice your neighbors; and hearing anyone else is nigh impossible. The one downside to our site was the nearby pit toilets – but the wind blew the other direction, so it really didn’t bother us a bit. 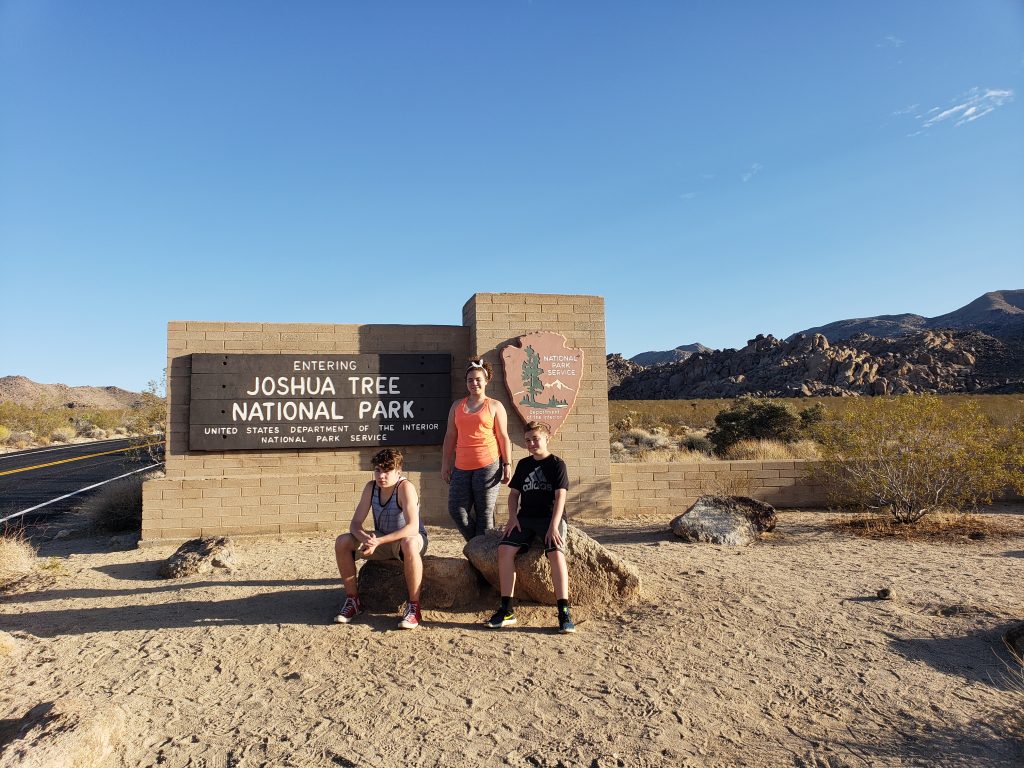 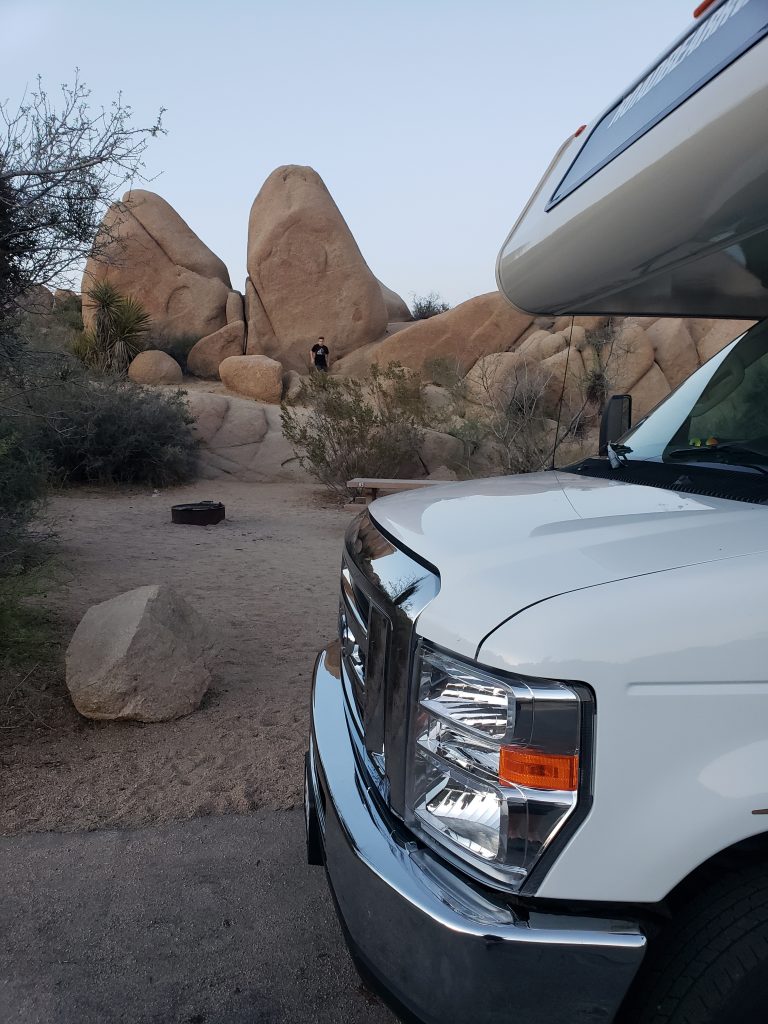 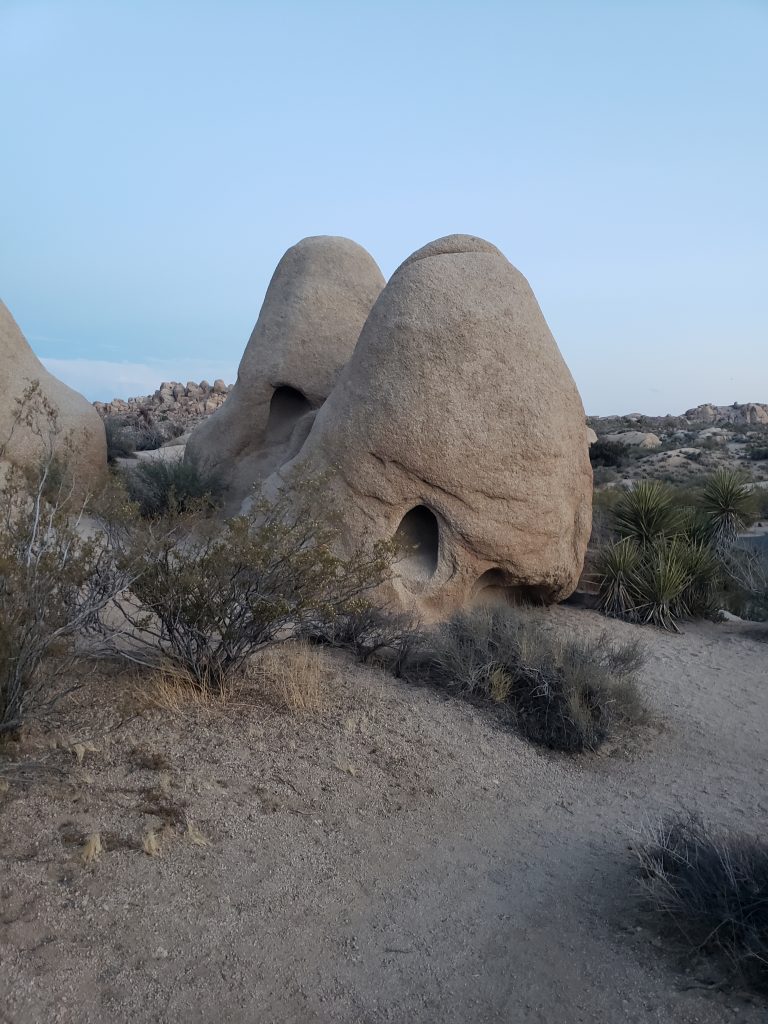 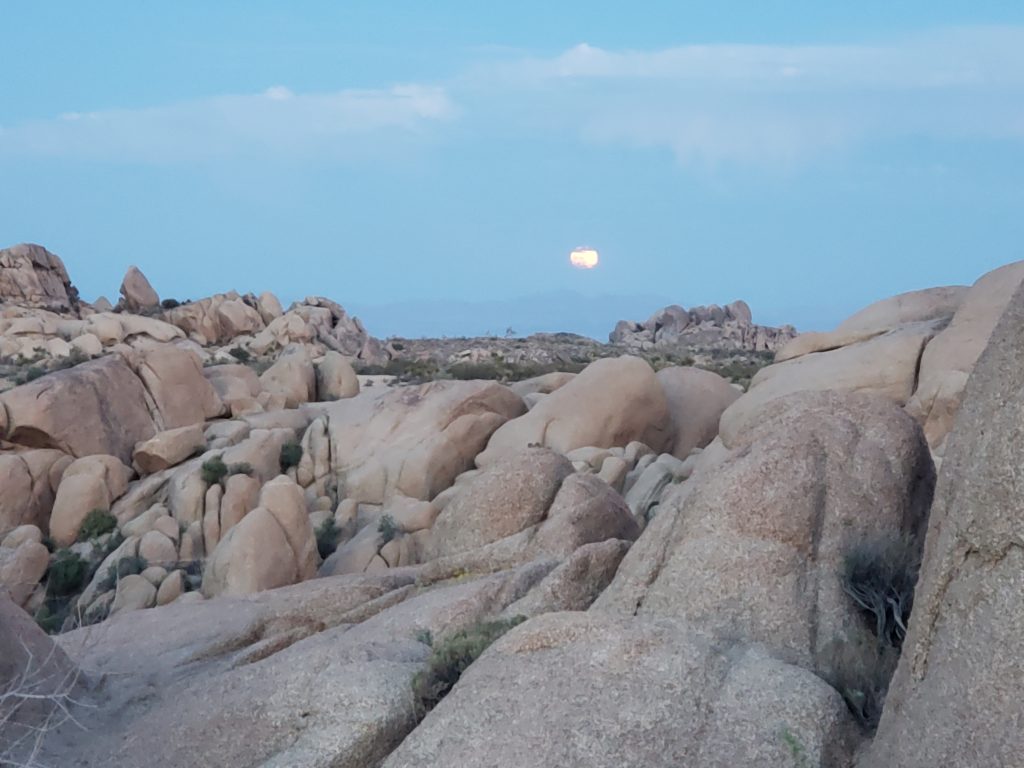 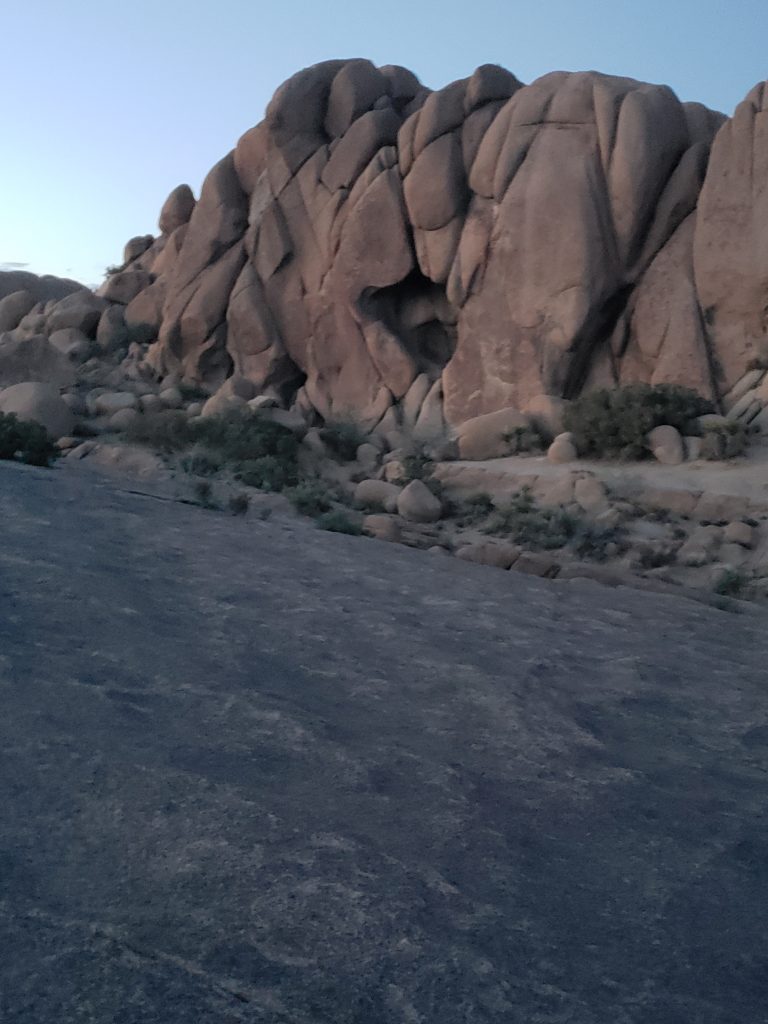 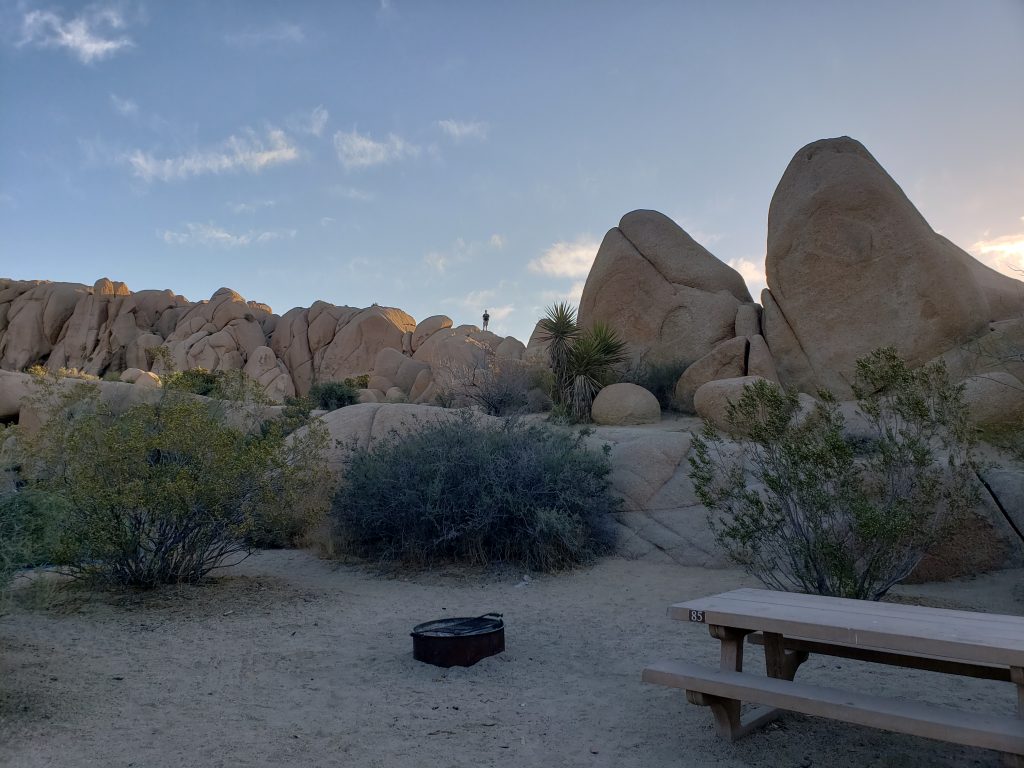